hardyrange wrote: ↑
13 Jul 2019, 09:25
Walk down these streets
I guess I'm getting lost in a lie
It seems like a vision
You let me see the world through your eyes

Vorabregistrierung gerne per Email an mich
oder in diesem Thread.

Round system:
2 rounds, plus final (time limit: 2 h each)

Format: VEKN Constructed
Proxies are allowed.
In case we have less than 12 players,
the Multi-Deck System will be used.

Entrance fee: 10 €
This includes a fee for the location, but also a "flat rate" for various drinks and sweets on site!
Dinner can be ordered by various services (brochures are available on site) or bought, just around the corner, at a pide/döner/pizza place - or you can bring your own food.

Pre-registration is possible via email to me.

First place will get the Edge, each Methuselah who hits the final will receive one of five buttons. 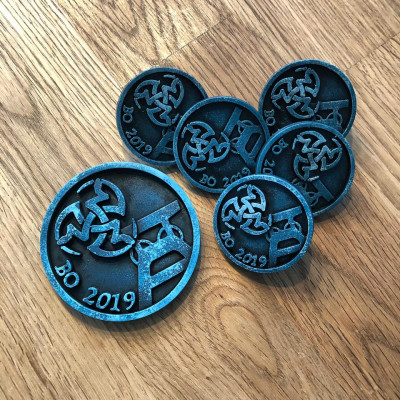 Jens Niemann - Shalmath Multiaction/Summon History
▬|█████████|▬ This is Nudelholz. Copy Nudelholz into your profile to make better Kuchens or other Teigprodukte! Oder Take it und hau it on the Kopp of a bekloppt Person to give a better Gefühl than vorher !
Top

Here it is!
As Always during the mightnight tournaments Great fun!! Thanks for hosting. I hope you organize it again next year.

Ok first here are a few notes: 1. I am not a fan of ashur tablets. They are overpowered and I think the card is a problem, but that is for another topic. 2. I prefer to play midcaps over big caps so it is a little out of my comfort zone. 3 I like Aching Beauty, but never had a deck with it like this. Way in the past I tried it with Anson and other midcaps, but it was too wonky. Also I prefer it over grand ball, because it gives the toreador such an intresting game experience. It forces your prey and predator to interact with you diffrently. 4. I made this deck fridaynight, because I wasn't in the mood to play any of my other 20 decks.

The below deck is an adaptation a deck from Armen Khachikyan who won the Russian EC of 2016 with it. He has an intresting angle for playing aching beauty so I wanted to try it. Look it up on http://www.vekn.fr/decks/twd.htm

I decided to use group 1/2 instead of 3/4. I think it is better if you don't use OBF. Also Ashur fits so well in this kind of deck.

So in advance some changes to the below deck.
- 5 telephatic misdirection, +5 deflection: Oh boy I was defenceless a lot of the times and I got away with it. Anson without superior auspex is a problem.
- 1 Flurry of Actions, +1 Powerbase Montreal or Voter Captivation
- 1 Political Stranglehold, +1 Ancient Influence
+ 1 Aire of Elations: I thought it was already in the deck but I guess I forgot to include it.
-1 Masika, +1 Francois Villon: Masika was never on the table, but it feels like Francois is stronger in this type of deck. His ability emptied a dominate vampire and caused an oust.

So my experience during the tournament:
I was lucky at a few points during the tournament. There was an intresting stand of against Hardy’s Unnamed deck in the face to face of round 1. He was gaining 4 pool each round and but also loosing 4 each round. Next to that I was gaining and loosing pool. This went back and forth for about 7 rounds and time was running out. But then I got my banishment to target unnamed and I got a handshake in return. I think the finals could have been won be anyone exept hardy at some point during the final. Hardy was tpseated, but didnt knew the deck of his predator, which turned out to be a Malkavian Antitribu Bleed deck. It was his worst matchup. I brought out Alexandra first because I had 3 transfers and wanted superior auspex to defend against a big lasombra, but that turned out to be not that urgent. I didnt draw a single Aching Beauty the entire game which slowed down the ousting dramaticly. But I was able to pressure my prey well enough to make him loose wakes, getting his defence down. I presume the !Ventrue was clogging on prevention, because he had a very hard time ousting his prey. When his defence was down I was able to land some bleeds. Anneke stole the show blocking 2 bleeds making him locked out, giving me the oppertunity to oust. If the above is not accurate, I am sorry, I was drunk as well. Thanks Dietmar for keeping my throat wet